Posted on November 1, 2013 by Annie McGovern

The idea for this post came after trudging through a very disappointing book about the Chesapeake Bay.  Written in 1951, “The Bay,” by Gilbert Klingel, was probably a new and exciting wonder of its time, when people still went scuba-diving like this:

Yet, unfortunately, this book just doesn’t hold up, partly because the author repeatedly concludes that the reason why certain creatures exhibit certain characteristics are “great mysteries that we’ll never know” (which we know now) but mostly because the book doesn’t seem to be organized in any discernible fashion.  He spends half a chapter talking about jellyfish, and then dedicates an entire chapter to them again later.  Why can’t they all be in one place?  Why did he describe the same type of jellyfish twice?  Why is his experimental method to reach out and grab at anything that passes by his helmet?  Sorry, the book really isn’t that bad; it has just become obsolete.

Anyway, enough of this.  The real purpose of this post is to give you a list of my favorite books about, or featuring, the sea.  I spent a semester at sea a few years ago, and if I could, I’d grab a bunch of books and go sail away forever (or at least until I ran out of books).  So here we go:

An amazing thing about this book is that its author, Joshua Slocum, was not a writer.  This non-fictional account of Slocum’s adventure around the world was originally written down as notes and memos in the ship’s log during his voyage, without the goal of captivating an audience.  However, Slocum’s real adventures and the phenomenal insight into this man’s struggle with loneliness makes this one of the best sea adventure tales every written.  I recommend this book to everyone, whether you read it because you love the sea, or because you like to read. Whatever the reason, you won’t be disappointed.

This next book is an interesting one: a compilation of stories about the sea, most of them excerpts from other works.  This book will give you a wide picture of the sea, from Richard Henry Dana’s journey as an ill, Harvard drop-out in 1834, to Robert Gould’s thorough instructions on what to pack in your hold before attempting an ocean crossing, and a minimalistic tiddlybit by modern poet Raymond Carver.  This is a good way to get a taste of what ocean literature sounds like, and in fact, it’s through this book that I discovered Slocum’s. I plan to read all of the books featured within this one, eventually.  I’ll let you know how it goes. 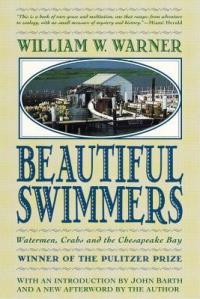 Although this book is not about sailing, I think it still has a place within this list – and it’s a Pulitzer Prize winner! Unfortunately, I read this quite a few years ago, so I’ll defer description and praise to a commenter from Amazon:

“This wonderful work contains all you ever wanted to know about the life cycle of one particular kind of crab that lives in Chesapeake Bay (the kind you probably smashed with mallets if you ever went to that area). Surprisingly, for most of its life, the Atlantic blue crab has nothing to do with beer. Taking it for a focus, Warner draws connections with the sea, the rivers, the crab-friendly environment that produced such a wealth of the creatures, and then the people who live from that wealth, the islanders who lived isolated for centuries, but are now firmly within the web of modern life. Warner tells of the marketing of crabs, the catching of other Chesapeake products like oysters, and even of festivals like a Miss Crustacean contest ! You can learn about esoterica like crab pots, the Waterman’s Union, the religious heritage of crabbers, and lots more. My edition came with a number of excellent pencil drawings of crabs, crabbers, and maritime scenes from the area. I was disappointed by only one thing—-reaching the end of this great book.” (Robert S. Newman)

Okay, now I’m going to stick in a bunch of books that I like to call the “duh” additions to this list.  As such, instead of telling you what they’re about and how awesome they are, I’ll just throw a bunch of pictures at you. 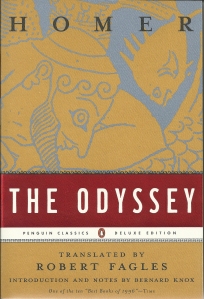 This one, of course…

So I will say something about “Moby Dick”: The two main reasons why people don’t want to read this book, I think, is because of the length and the vast amount of pages dedicated to describing the anatomy of the whale in mind-numbing detail. Yet, there are ways to remedy these issues! One is to buy the children’s version, and the other is to just skip over the whale parts in the middle – it’s pretty easy to do. You’ll know right from the beginning of a chapter if it plans to add nothing to the plot. Just skip it! 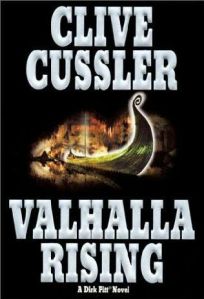 Moving along, if you’d like a bit of mass market mystery ocean adventure murder buzzwords buzzwords fiction, not only do I have a book for you, but an author who pretty much writes about nothing else.

In the great words of Amazon:  “It is July 2003. In the middle of its maiden voyage, the luxury cruise ship Emerald Dolphin suddenly catches fire and sinks. What caused it? Why didn’t the alarms go off? What was its connection to the revolutionary new engines powering the ship? NUMA special projects director Dirk Pitt races to rescue the passengers and investigate the disaster, but he has no idea of the bizarre events that are about to engulf him.”

We’re nearing the end with a book that has recently gone out of print, and my own copy has disappeared, probably into some dark dimension made of lost books.  It’s a very real story of how a couple survived for 117 days on a rubber raft in the middle of the Pacific Ocean, after a passing whale struck down their yacht as they were sailing for the Galapagos Islands.  It’s not one of the most eloquently written books around, but HOLY HELL, it was quite a story.  Good luck trying to find a copy though.

And now we come to a close with some pictures from a massive marine bio book, put together by Fabien Cousteau, which contains pictures and info on pretty much everything about the ocean, and all the stuff that lives in it. 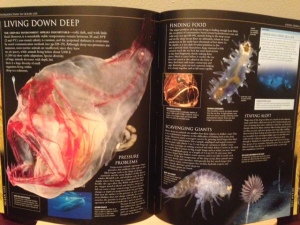