I recommend this book for a special class people I call “the wannabe layperson.”  Let me explain; there are tons of books about complicated subjects, like astrophysics, quantum physics, politics (PLEASE NOOOO!) that are written specifically to inform the general public about said subject, in a way that doesn’t make the public want to slam the book down into a slushy puddle and coax the nearest dog to take a piss on it.  Sometimes it works, and sometimes not, especially in case of hard science.  Anyways, although this book is written for the layperson, I’m not entirely sure that someone who knows nothing at all about the subject matter could pick it up and understand what’s going on…

Hold up, I need to back up for a second.  When I say understand, I don’t mean become an expert in quantum physics.  I have yet to encounter a general public hard science book where, in the end, I was able to understand 100% of what was being discussed. So when I say “understand” I really mean “have some semblance of understanding,” let’s say 40% or above.  Continuing…

As I said before, I would say this book is for the wannabe layperson, or the person who is not a trained scientist, but has read quite a bit of this particular layperson sciencey flooflah before.  It’s a book for a wannabe science nerd, and here’s why:

As the title suggests “The Grand Design” is a book about EVERYTHING.  Seriously, it’s a book that attempts to explain how everything in the whole damn universe works, in less than 300 pages! And the answer (which I still don’t understand ㅠ.ㅠ), evokes the M-Theory, which is a theory that pretty much smushes all the ones that came before it together.  The book delves a little bit into these theories and what they are (the general theory of relativity, the standard model, nuclear physics, to name a few) but not really.  Now, I’m not saying you have to be an expert in classical physics in order to understand this book, but I DO think that you have to have some working knowledge, and maybe a little more than the average dude on the street.  Basically, it’s written for the layperson who has already read some layperson books about other, relevant, sciencey things.

With that, my general feeling about this book is that although there were some highly complicated bits I couldn’t make heads of tales of, there were also some bits that made me think very deepy about lofty topics. I love that. So if you’d like to take your brain for a little spin about the cosmos, this book is definitely for you. 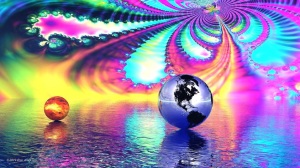 Here’s a freaky deaky picture to end with.

Don’t you just want to know it all?